The Problem of Choice in America — Roe V Wade, 40 years on…

By thenewamericanlondoner on January 23, 2013 | 4 Comments

Lives Reduced to Numbers: Well done in striking one for hypocrisy everywhere, Dallas Pro-Lifers (Taken from The Guardian’s website)

I must confess, to you my brothers and sisters, my dirty little secret at last: I. Am. A. Recovering. Republican.

That’s right. Reagan became president when I was a wee slip of a toddler stumbling forth into the world and stayed in that Oval Office for the next eight years, until the man I thought at the time was his heir apparent assumed the throne and for me, this just seemed to be part of the natural circle of life. I just assumed that Reagan had reigned as a sort of Republican Emperor, a sort of Caesar for a while. What he stood for was part of The Holy Trinity of my childhood: Father, Mother and the Holy Right. I felt an unspoken, unarticulated loyalty to something I knew nothing about and, like Pope Benedict, had there been a Reagan Youth, I probably would have joined it because it seemed for a time like he represented a larger tradition of which my parents, my father vocally, formed a part. 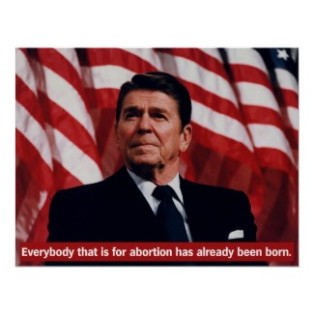 Glib arguments:Reagan was full of them, but they still don’t stand up to scrutiny. (taken from zazzle.co.uk)

Why do I make this digressive confession and risk losing my audience after the fourth sentence? Apart from the fact that it is characteristic of me to interpolate myself in an outdated, postmodern sort of way?

Because looking back, very little of my childhood makes sense. There was a number of years, possibly three, possibly four (the math gets fuzzy when I think of my Republican childhood), when my father, being an active member of our local church, organised coach trips to Washington D.C., annually, to march on the capital and demonstrate solidarity with… well I didn’t really know at first. For me, as a kid, jeez, it was an adventure. An adventure to march in our numbers against… Again I hadn’t a notion what why we were there. It was so hot most of the time I just hoped there was ice cream at the end of it all. And I was impressed by the buildings. I had a childlike inkling that I was in the presence of some great power both fascinating and well beyond my ken.

All I knew then was that my brother and I took our comic books and pack lunches, bundled on the back of a coach, met other Catholics on the bus and spent the day near the center of government in the free world. I observed several things through young and impressionable eyes. That for some people making similar pilgrimages from different parts of the country, this was a day of fancy dress, but for some reason, those marchers always chose the same costume, that of the grim hooded figure with a scythe on stilts. I always kept well clear of those Christian soldiers. Others carried posters that looked like they had emerged freshly from some horror films with bloodied and barely formed, lifeless infants. Those images hurt my eyes and thundered in my brain for ages afterwards.

Bogus: Surely an innocuous way to recruit the youth?

A movement that indoctrinates youth by desensitizing them to violent imagery and and demanding an unquestioning adherence that makes detractors sound cowardly? Remind anyone of any other historical movements?

Both my adoration of Reagan and the right and my steadfastly dogmatic and childlike support of the pro-life movement came to an eventual end, the former, oddly enough, far faster than the latter, which goes to show they are not one in the same, much they may seem like it. I got to be a teenager and I did what teenagers do, I questioned things. I had help along the way. I met a friend when my family uprooted from New Jersey to Pennsylvania, from strip malls to the boondocks and this friend had the most unlikely family to ever exist in the heart of the bible belt of the Pocono Mountains, with a Scottish intellectual medieval literature scholar for a father, an artist for a mother and a sister who would go on to work for the democratic party, there were times when I felt oddly like I had walked into the lion’s den, going over to my friend’s house for dinner. Did they corrupt me? I don’t think so. If they did, I needed corrupting, but I think all they did was help shine the light  a little brighter on the collection of ideas that had amassed in my mind at which I had never really looked very closely. After I started questioning, there was no going back. “When I was a child, I spake as a child, I understood as a child, I thought as a child: but when I became a man, I put away childish things.” And so it goes.

So it amazes me that in my country the issue of abortion still polarizes so badly. In fact, it seems, the issue is more divisive and corrosive than ever.

For the left, the right’s position is staked out by psychotics that bomb abortion clinics, kill doctors and care more about the unborn child than the ones that walk around as living, breathing sentient beings. This fanaticism and view of Pro-lifers as slightly unhinged is not without basis, especially considering the documented violence connected to doctors who perform the procedure and a quick read of Rick Santorum’s views on the politics of childbirth. But I loathe reductionism and to be fair to my father, while he was organizing parish coach trips to the capital, he was also putting in countless hours for Several Sources, a charity that provides shelter, help and advice to expectant mothers who have, because of difficult circumstances are tempted to have a termination, but have turned away from that option.

For the right, and I should know, having been a sheep that has long strayed from the fold, pro-choice supporters are murderers lobbying for abortions on demand as a source of some sort of dystopian population control. Glib arguments lash forth from their tongues about how “rape doesn’t justify MURDER”, “abortion stops a beating heart”, and about individuals who choose to have the procedure are tantamount to Nazis. And nothing moves forward in this language of fire and brimstone, but it does serve to ignite a populace’s collective temper. My parents are Catholics who believe in social justice, my father being a retired social worker. It confounded me that he was also a staunch Republican until I realized that his vote turned on the issue that also turned so many Kennedy Democrats into eventual Reagan Republicans: childbirth politics in America, which is what seems to connect my two childhood anecdotes that I started with, the idea that the conservative right has used this intensely incendiary issue to indoctrinate those who know no better and lasso  a tight hold around those that might otherwise stray from the collective by violently tying moral, personal values to good old, screw-the-poor, virtue-of-selfishness, social conservatism, embittering the taste in my mouth for either. 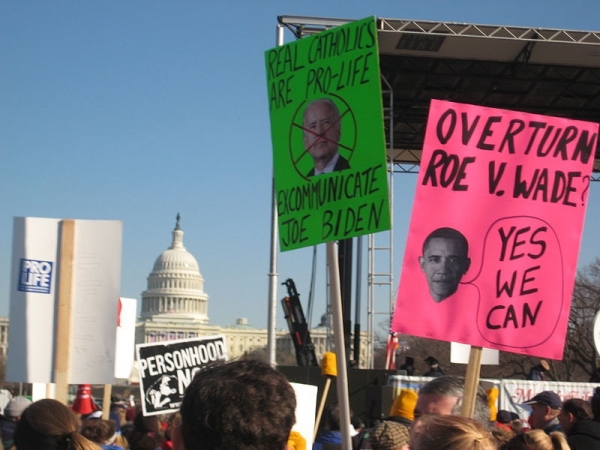 March For Life (Taken from schmoop.com)

Despite the issue rising up like a geyser every once in a while, it does not play a significant part in UK politics and oddly enough, we are the better for it over here. In 2011, the US recorded 20.8 abortions for every thousand pregnant women. Britain comes in significantly lower at 17.2, Scotland at 12.0, despite having legalized abortion six years before their American counterparts. To listen to the pro-life movement, you would think the NHS was doling them out.

If I speak with some bitterness and some certainty, it is because I speak also with a modicum of empirical authority, having to make the choice with my wife to terminate our unborn daughter’s life at 24 weeks. It was not a choice we took lightly and not one that I’d wish on anyone. But our baby’s liver had not grown, her body was not circulating fluid and neither her lung capacity nor her brain development would have been sustainable for any length of time. We chose what we did over her dying in my wife’s belly, or taking a few short breaths outside of it. We held our dead daughter that never lived, we buried her and Ralph Vaughan Williams’ Lark Ascending played at her tiny funeral. We named her Pip and I weep bitter unutterable grief thinking about her.

But I also find it bitterly galling to see individuals presume to label and judge and pronounce about “murder” and “inviolability”. Our experience, if anything, made us more personally pro-life for ourselves. We would never have willingly chosen our situation, and no one who is pro-choice is pro-abortions, no one seriously wants abortions to happen, but at the time the situation chose us and we had to work within a very small space of limited choices. I’m thankful that Roe V Wade happened, not for most of the reasons that you hear volleying back and forth in high profile debates, but for all those reasons that you can’t think of and would wish never to need to think of, but for which every individual or individuals should have the freedom to make that most loathsome and difficult choice. I quoted from that old rascal St. Paul earlier and though Shakespeare warns us that “the devil can cite scripture for his purpose” I think that Damascan pilgrim gives some particularly good advice to those who would purport to follow him:

“Therefore judge nothing before the time, until the Lord come, who both will bring to light the hidden things of darkness, and will make manifest the counsels of the hearts of men.”