Something Else for the Weekend

By thenewamericanlondoner on July 14, 2012 | Leave a comment
My best laid plans for blogging this week seem to have all ganged aft agley. It’s been the penultimate week of term and so I’ve been putting reports to bed and eating glorious Indian food. More on that anon. As my compatriot the former governor of California used to say, ‘I’ll be back’. In the meantime, to tide us all over, here’s some more Bohemian Hackney mdf art to feast your eyes on. This little piece resides on Clapton passage and I just can’t decide, but I think it’s probably beautifully interacting with its environment. There are implications though that the subjects are trapped in their own depiction, non? It is covering up a house under construction in a dank area behind a shop and near a dumpster, if that aids interpretation.

When does street art become less edgy and more trendy? It could be when graffiti artists get commissioned, but I still think there are probably immense benefits to publicly funding a street artist and then celebrating his work, as happened last month with American artist Frank Shephard Fairey. Read about it here.
I’ve also started a new page on this blog entitled other writing and hopefully will be writing more frequently for sites like The Hackney Hive and other assorted publications, so I guess, quite literally, watch this space. In the meantime, here is the review I did of Sheba on Brick Lane for Hackney Hive. I have to admit, I was surprised. These days, the Asian end of Brick Lane can seem a little tired, so I was glad to find a delightful pearl among the… other places around the area.
Enjoy your weekend, wherever you are. Many thanks for reading.

The Best Coffee in Hackney

I’ll admit, I was surprised when Pacific Social Club opened its doors for business. Not much of the gentrification process in Hackney surprises me any more. I expect street markets to pop up out of sewer grates nowadays, but not on Clarence Road. Not my Clarence Road.
Community-oriented, friendly, dirty and noisy, Clarence Road always felt when I first moved here just a bit edgier than Lower Clapton Road, probably because it’s emptier most of the time and it’s not a street with a lot going on. There are businesses, newsagents, convenience stores, bric-a-brac, Merry-go-round, but posh coffee shops? Not here. Until June of last year when Liam Casey and Nico Atwater opened up Pacific after overhauling the space formerly occupied by Lokat’s motor spares.
Since its opening, Pacific Social Club has created an inviting space that has rapidly established itself as a feature of the area and is going some way towards making Clarence Road a destination for more than just riot tourism.
The coffee is superb and unmatched anywhere in Hackney. Machiattos are flawlessly executed, flat whites are the subtlest, smoothest blend of coffee and milk, as only the bona fide Antipodean baristas (my last flat white there was made to precise perfection by an amiably chatty Kiwi called Matt) can do.The atmosphere is vintage with wall to wall vinyl covers behind the front counter, pastels and gentle, breezy dashes of turquoise and whites whimsically reminiscent of, appropriately, the South Pacific in the 1950s.
We’re taking the boy to Legoland this weekend, but if I were sticking around, I know where I’d be getting my Saturday and Sunday morning coffee. Pacific Social Club will soon go a long way towards making this humble thoroughfare quite a desirable destination.

Like Loading...
Posted in: Best Coffee in Hackney, Coffee, Eating in Hackney, things to do in London

My Jewish colleagues, a number of them from Hackney old East End Jewish families born and bred in Clapton only to later drift north to Boreham Wood, expressed no small amount of shock at my plans to enjoy The Clapton Festival this weekend. And it is funny how much Hackney has changed. 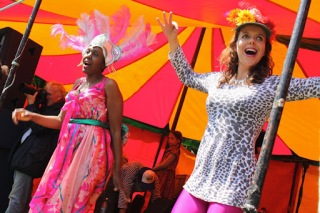 From a village adjacent to London where wealthy merchants came to buy big houses and retire (so, the Essex or New Jersey of the 16th Century then?) to a run down borough best known for its high incidence of knife crime; rough, cheap, ‘bohemian’, ‘ethnic’ area with ‘a lot of character’ to gentrified destination for the hip and famous. Now the cool seems to be spreading and with it the decent coffee shops and some of the fun too. Some people have complaints, but I have to say, the effects, on balance, seem good for Hackney, which is one of the reasons I’m looking forward to The Second Annual Clapton Festival. The other is, there really will be something on for everyone, so if you’re passing East or not, but in London this weekend, make time. There may be scoffing and a bit of ‘far from that I was rared’ from those who know Hackney of old, but you won’t regret it.

Like Loading...
Posted in: Clapton Festival, Eating in Hackney, heritage sort of, The East End, things to do in London

Divine Revelation Under The Arches: Coffee Is My Cup Of Tea 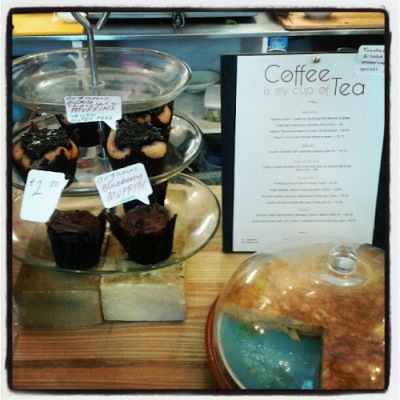 Last Monday was Shavuot, the Jewish festival celebrating the bestowal of the Torah on God’s chosen people. I work at a Jewish school and the school was closed for the day. As a gentile and not one of God’s chosen, I had the day free to enjoy the rare appearance of the London sun shining down and bestowing its blessed warmth on all God’s creatures.
My wife and I, footloose and child-free for the day, aimed to lunch at The Happy Kitchen, which we’d heard so much about but had always found difficult to locate. As it happened, last Monday was no different for us. We searched and searched the arches around that little paved tributary of London Fields letting out all the sun worshippers on these rare, bright days and found The Happy Kitchen bakery, which by all accounts is still doing lovely gluten-free cookies and cakes and ended up lunching at E5 Bakehouse, sitting amidst the buzzing atmosphere full of bright young self-made stylistas of Hackney, enjoying an unusually delectable chilled pear and pea soup.
However, the real epiphany came after lunch when we decided to head to somewhere else for iced coffees. A couple doors down, where The Happy Kitchen used to be, we found Coffee is My Cup of Tea, where we were promptly served deeply luxurious iced coffees that cooled us as we sat outside and sipped in the afternoon sun. The inside was bright, airy and full of clean bright whites with welcoming, railway arch industrial chic about. Sadly, I cannot speak for the menu, except to say it was full of organic classic looking Spanish-leaning savouries and richly tempting cakes and muffins that I am looking forward to trying on my next visit. But if you are ever in need of some divinely inspired iced coffees on a warm day in Hackney, Coffee is My Cup of Tea does not disappoint. 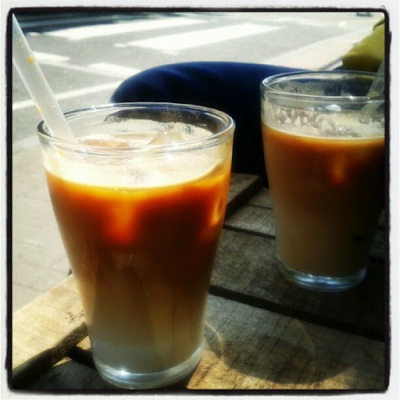