Dreamy and Starstruck with Sedaris 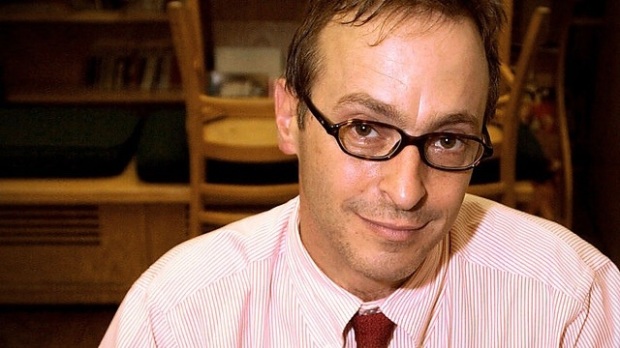 “Isn’t this so exciting?” I am giddy.

We are at the BBC Studios in London for a Radio 4 recording. Radio 4 recordings rank among my favorite things to do in London (that and listening to Radio 4 in the morning while thinking snooty thoughts about all the other commuters on the train, but that is a different blog post). It keeps the “entertainment” budget down and is always a blast.

I am whispering in the hushed tones of a sweaty palmed schoolgirl about to meet Harry Styles. As it happens, I am not about to meet Harry Styles. I am about to meet David Sedaris, author of Dress Your Family in Corduroy and Denim and When You Are Engulfed In Flames as well as many other canonical classics. He is my expat writing idol. We are here to watch him record another series of readings for the BEEB’s next season of Meet David Sedaris. Initially excited at the prospect of having my favorite book of his, Me Talk Pretty One Day, signed by the man himself, I could now feel my nerves gathering. We had arrived so early that our timing bordered on unfashionable; such was our fear that we’d be turned away because of Sedaris’ popularity.

I had also expected the book signing to be afterwards in some chaotic rush waiting at the “stage door” like some stadium rock concert. Contrary to this, when the kind employees of the BBC usher us in, we are given a choice: directly into the theatre to the right or the line to the left if you have anything you want signed. And there, sitting behind a modest table and chatting affably to attendees who had brought books to sign was David Sedaris, smiling broadly as though his favorite thing to do of a Sunday afternoon was to shoot the breeze with his readers and sign autographs. I get to meet him sooner than I expected, I think, but what will I say? I haven’t even had time to come up with anything witty or even competent.

Further adding to my discombobulation is the man in front of us in the line, who is (some might say selfishly) squeezing as many precious moments of time as he could out of his encounter. “So sorry about this,” he says. “I’ve brought these for my book club.” He piles onto the table six thick volumes that might as well be The Collected Works of David Sedaris. I do hope the book club appreciate the effort, I think to myself. And the time.

“That’s okay,” David reassures, “Nobody minds.” His kindly eyes look sincere, but I’m not sure he means it. I raise my eyebrows to the missus, who looks at me admonishingly.

Book Club Man walks into the theatre door, his volumes bulging from his rucksack.

“Hey, we’re both wearing corduroy jackets! What do you think of that?” Already Sedaris has thrown me a curveball by remarking on our sartorial similarities.

“Quite. A. Co-inc-i-Denice?” I say, standing smiling stupidly, frozen in headlights. Uncharactieristically, I find myself a bit starstruck. The man is making polite conversation and I am acting like he’s thrown a mind-clearing zen riddle at me. Plus, my voice sounds a half octave higher than it should. Whether it’s to match Sedaris’ own high-pitched strain or anxiety, I’m not sure. I cast around mentally for a response to redeem myself and my mother-in-law’s favorite aphorism about how, “great minds think alike… And fools seldom differ!” comes to mind, but I discard it since it sounds just as foolish as what I’ve already said, which is not much.

Irish people generally and large numbers of Britons pride themselves on passing celebrities in the street with casual indifference. It’s one of the reasons why artists and musicians love spending time in Ireland (that and they pay no income tax). One Irishman famously refused to vacate an elevator for President Clinton’s visit to the Guiness Brewery in Dublin uttering, “Sure, who’s he that I should have to move for the likes of him?”

It’s one of the nicer qualities I thought I had acquired having lived over twelve years with an Irish person. According to my Irish wife, we have passed British actress Denise Van Outen, Spice Girl Gerri Halliwell, and no less a demigod of Broadway and The West End than Lord Andrew Lloyd Webber (yes, he is a lord, lil’ crazy, huh?) in the streets of this fair metropolis. They could be nobodies or (worse yet) anonymous estate agents for all the notice I took of them at the time. In fact the only thing that strikes me as memorable about any of those encounters is the way Paula gleefully observed how plain Denise Van Outen looked, which, apparently, “just goes to show it’s all makeup and airbrushing.”

Still, for all my celebrity nonchalance, here I was in front of David Sedaris, a man whose writing I found both riotously funny and also felt deeply “connected” to, amusing and poignant at times in equal measure, standing. Mute. Smiling like the village idiot.

“We would like you to inscribe it to our son,” we manage to tell him before I go dumbstruck. “He’s six, so of course your writing is entirely inappropriate for him now, but we’re sure he’ll appreciate it when he’s older.”

“Well, you’re going to have another one in 2015,” Sedaris confidently predicts. “The ultrasound will say it’s a girl, but it will actually be a boy, and although he will have an incredibly small penis, he’ll get on really well in life, great personality, wonderfully talented and you’ll name him… Congressman! Yes, you’ll name him Congressman.” I have to admit, at least until halfway through, he had us with his predictive powers, and now he has us and the rest of the line of attendees waiting for autographs in tears laughing. You either appreciate David Sedaris’ sense of humor or you don’t, like the marmite of memoir funny men. Paula jokes with him about how our son is half-American and how we were once told by American Embassy staff that he could be president legally if he wanted to. “or Congressman!” quips Sedaris. “Or Congressman!” repeats Paula, who seems to suffer from no similar case of starststruckness.

I am reminded of the time when I was 15 and I stalked Michael Stipe for three blocks down South Street in Philly, my friends reluctantly in tow, to finally follow him into the since closed Rhino Cafe, shake his hand and tell him what a great inspiration his music was and would always be to me. Yet here I stand before an eloquent and witty writer in a state of paralysis.

Sedaris gives us our signed copy of Me Talk Pretty One Day, we thank him, and we walk into the theatre. As we sit at the back with Paula still raving about how funny and strange he is at the same time, I half- distractedly open the book and read the inscription:

I knew your parents when they were young.

The lights dim, the producer announces the show, I sit back, resigned to the fact that she is probably right.

If you’ve never read David Sedaris’ writing before, do get your hands on some of his stuff, post-haste. I heartily recommend Me Talk Pretty One Day, a book that has caused me to utter embarrassingly loud guffaws on the train. By myself.

And if you are in London or indeed anywhere in the UK for any extended period of time, get yourself on the BBC mailing list for free tickets to live recordings. They’re bags of fun and they’re free!

Like Loading...
Posted in: American in London, Comedy, Me, On books and writing, Radio, Reading, Starstruck American, things to do in London, Uncategorized | Tagged: BBC, David Sedaris, Radio 4

Journeyed far into the unknown west on Saturday.
West London. W6. Hammersmith to be exact, to be interviewed by David Michaels from OnFm in the lovely Riverside Studios overlooking the Thames next to Hammersmith Bridge.
Fascinating experience. My first radio interview. We chatted for a little less than a quarter of an hour about how I came to move from the states to Dublin and then to London, my blog and my writing and what I hope to do with it, and my views on The Olympics. I really enjoyed myself and I felt it went really well, but I also learned a lot, the key points of which can be summarised into the following kernels:
Also, having got the recording already from OnFm, just listening to myself was enormously instructive. I think everyone should listen to themselves more often – teachers, parents, Mitt Romney – but so many don’t take the time.
Have a listen and feel free to offer your honest critique.
My Interview